At about 7pm I noticed a bit of a kerfuffle building on Twitter. Then I saw this tweet:

Can you hear me now?

Edward Snowden himself taking the Twitter plunge and like iron filings to an industrial magnet we followed. On the flip-side, Ed is only following one account….can you guess which one? 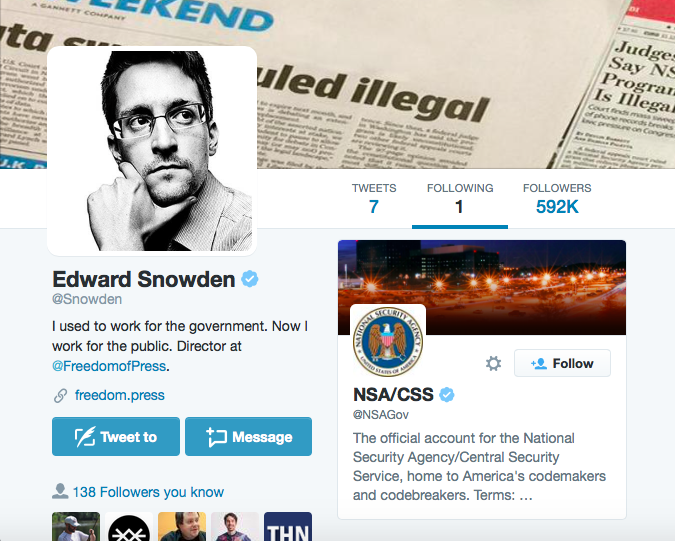 It was a brief first flurry of expertly crafted tweets mixing politics, humour and social commentary…
…and I don’t think anyone doubts the giant grain of truth behind the last tweet in his initial volley:

Here’s the impressively graphic way @Twitter showed it going down:

For now I’m not going to get into any specific ins and outs about his actions (though I’ve chucked in a few related perspectives since the blog was born). Right now I’ve got that feeling of witnessing something important. A massive body of evidence that the debate around what he did and what he shared is alive and kicking Twitter’s ass.
Love or loathe Ed, he put some key questions about personal freedom, privacy and state power at the front of millions of peoples’ minds. And still, over 2 years on, it grabs this kind of attention. Great, because we all need to keep that in focus. We owe it to ourselves so we can make our own informed choices about safeguarding privacy, and equally informed choices when selecting our representatives. Representatives we rely on to oversee the surveillance activities we do not and cannot control.
So, welcome Ed. I’m off to bed soon here in the UK and If you haven’t hit the million mark by morning I’ll eat my laptop.