A short piece as an attempt to break my writer’s block. Rather than tackle something meaty with a big research burden, I’ve jotted down some things that formed mental connections for me over the last few weeks. This is my opinion and my opinion alone. I may return to reference related research or articles, but in the meantime it’s just nice to have it out of my head. In the spirit of that please do feel free to comment. I’m not claiming a monopoly on ideas.

I’ve tweeted a few times about that familiar refrain: ‘eat less, move more’. It has much in common with the equally familiar (in my echo chamber at least) ‘spend more and expose less’ every time there’s a breach. 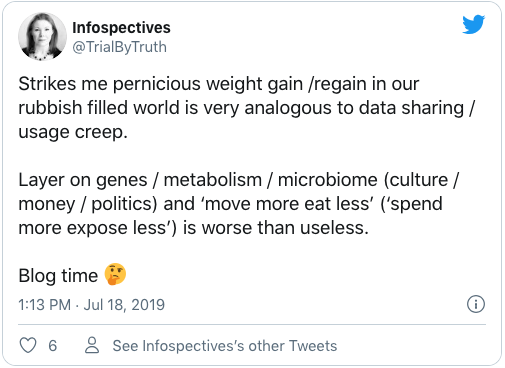 The primary correlation: both are many many layers more complex than they may first appear…and the cause of equal derision from those who feel others are making an excuse.

The fact remains that most people struggle hard to understand experiences outside their own sphere. The most vociferous minority when a 3rd party has a data store go pop? Often freelancers who are least dependent on a single entity to pay their rent. Far less vociferous are those at the everyday coal face, the ones who ARE dependent on a firm that might frown about some very public display. No CISO wants a public debate about failure to get distributed and complex infrastructure up to some wildly variable security standard, against a backdrop of the usual politics and budget bunfights.

Pivoting back to the weight loss analogy, there is, what has been fabulously termed, a syndemic: Two or more epidemics that interact with each other to worsen the outcome. Few are intellectually denying influence from genetics, the microbiome, hormones, metabolic baselines more generally, social factors, environmental factors and other direct and indirect demographic things at play, but we almost invariably circle back to food and exercise, with an extra bit of low carb drama and fat shaming thrown in most days. 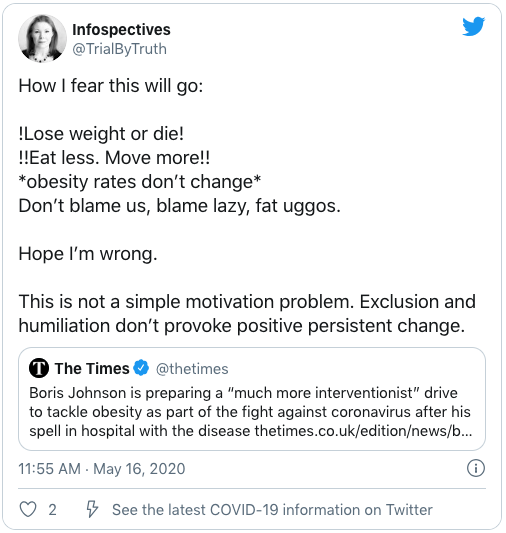 I’ve been subjecting him indoors to some pretty involved conversations about my weight loss journey. It’s a decades long tale that culminated in surgery and a raft of subsequent lifestyle and nutrition changes. Upshot has been loss of 100 odd pounds. For his sake I’ve reverted to this blog as my alternative head unravelling mechanism. The big question is whether I would ever have made this much of a change without that pretty extreme head start. My personal conclusion, for a whole raft of reasons related to a number of those sydemic considerations: almost certainly not.

As is normal, for me, this has thrown up lots of parallels to the day job. Just like eating, most of the world can’t just quit processing data. We need to make good health, education, social care, national security, infrastructure design, and more general scientific research based decisions. We also, acknowledging we don’t live in a totalitarian state, want to keep telling people about available products and services, or the policies that politicians want to pursue (a.k.a. advertising). We don’t want to be forced to navigate either markets or our democracy blind. The devil is entirely in the targeting and delivery detail. 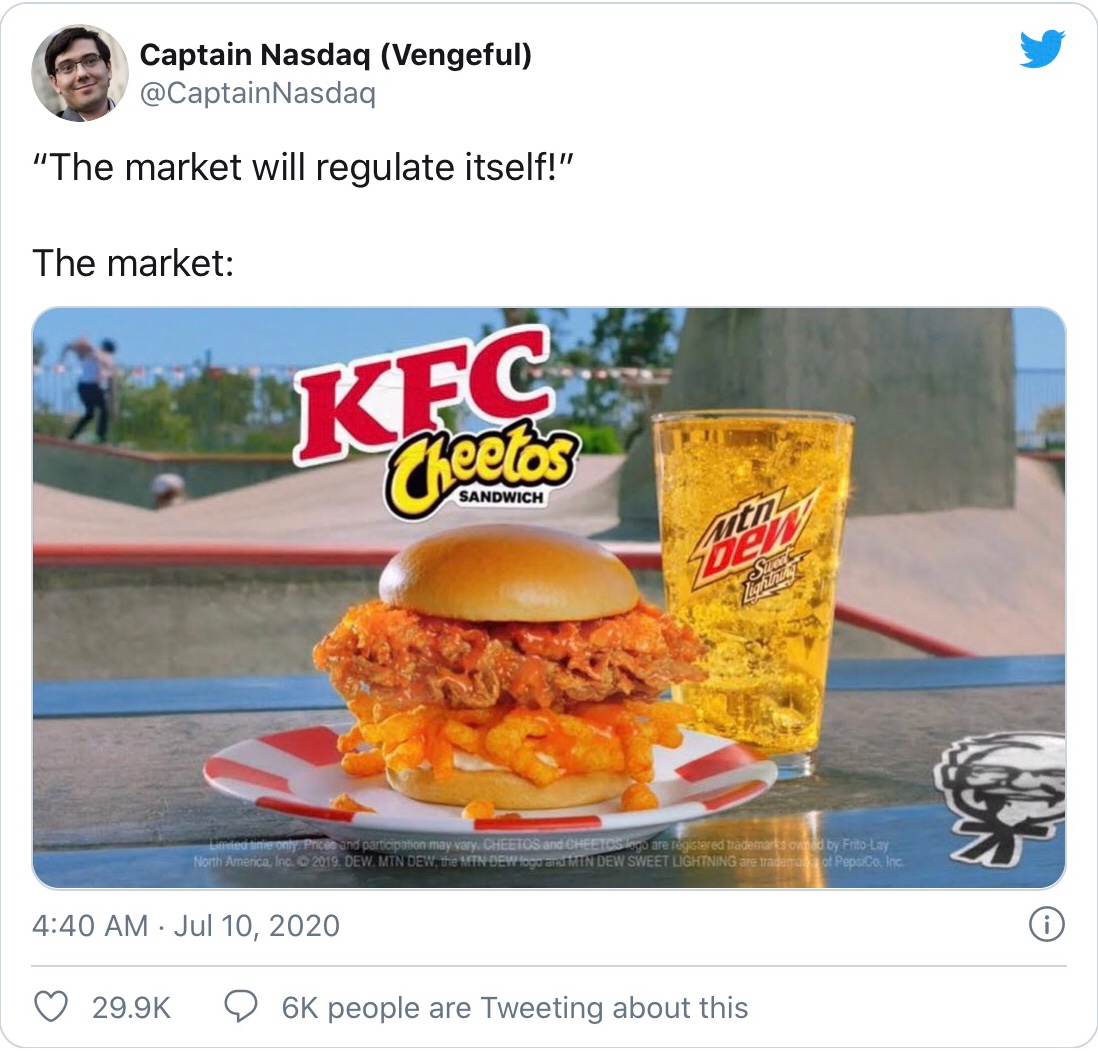 In a world where we can’t quit using the thing we are cautioned not to abuse, what constitutes abuse is internationally variable, highly situationally dependent, and often far from clear. So how does one go about planning change?

But that latter conundrum isn’t the most serious one, is it? The real crux of this, often falsely presented as a catch 22, is the benefit to be gained from maintaining the status quo.

“If you want free services, you give up your data. That’s how the internet was built. No giving up data, no ‘free’ internet service supply chain”

“If you want that convenience and quick, cheap delivery of energy, you grab something with high calorie density (and often low nutritional content) that you can eat on the go. That’s how the convenience food market and the industrial farming capacity to service it was built (or, vice allegedly versa, when creating demand to meet politicised over supply of some goods). No compulsive snacking, no convenience food supply chain.

What people have failed to question, until very recently, is whether the internet service and convenience food supply chains are in themselves deeply flawed. Respective root causes of privacy related human rights abuses and the obesity syndemic. Not sole causes, but, in the case of artificial constructs like Real Time Bidding for targeted ad placement, and the market creation efforts for stuff like corn syrup in the food industry, there are contributory factors masquerading as fundamentally unimpeachable components of modern life, with specially interested parties almost evangelically fighting attempts to question their practical and ethical value.

We have both an obesity and a personal data abuse syndemic and in both areas we have the same aggressive drive to individualise blame.

If you ate less and moved more you would not be fat. If you read more terms and conditions and shared less data, you would not be manipulated, lied to, and have your human rights whittled away.

Worth asking oneself who that narrative helps. HINT: Anyone with something to lose if collective or centrally mandated action is taken to scrutinise and curb lucrative contributory factors at play. Not tinfoil hat territory, simple social realities.

If a government who currently benefits from stasis, does not need to expend the time, money and influence to solve a problem, why would they? Instead, if something really has to happen, they will try to devolve responsibility down to the private sector or populous, starting with concerted effort to make the ‘problem’ socially undesirable by effectively devaluing subsets of people, products, or organisations. The general public are then mobilised, via the media, to make being that person, using that thing, expressing that opinion, or patronising that firm, socially or financially intolerable. There is a long tail of history to prove it. But the collateral damage when demonising people is very, very real and far easier to incite than to argue away.

So those are the connections that occurred most recently. If you read this thanks for your indulgence. Maybe let me know if you would want to read something like it again. Intention is not just to keep on musing. Intention is to write some more concretely objective posts, but for now this is about all my pandemic addled brain can handle 🙂