Will Humanity Survive The Internet of Things?

What if (and this is purely speculation), what if hackers and cyber terrorists are the least of your worries when it comes to the ever expanding internet and your ever-faster, ever more creatively enabled connections to it?

This concept popped into my head 15 years ago. I’ve never been disciplined enough to properly research, but much of the technology is now out there, or being actively investigated.

UPDATE 24th Sept 2019: Since original publication in 2014 things have moved on. From the MIT Technology Review (image links to article): 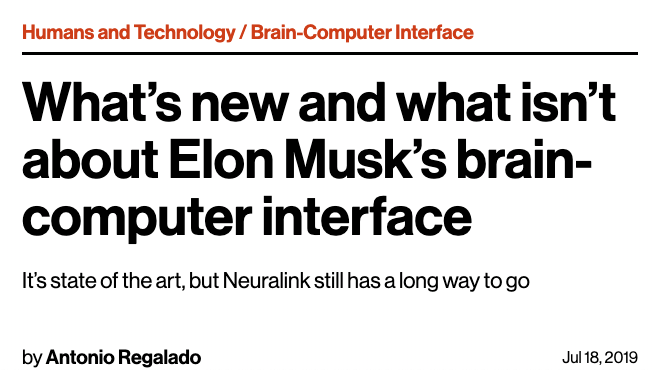 What will happen when everything and everyone is connected? Not just connected, but linked via sub-dermal tech, enabling direct neural interaction with the Internet of Things (IoT).

The current map of global interconnectivity looks suspiciously neural map-like. I’m SO far from the first person to spot that – but which picture is which? 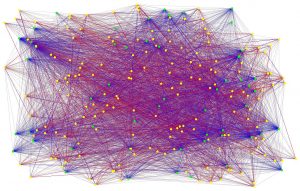 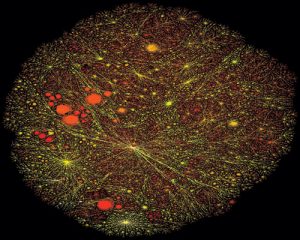 78%, 84%, 93% connected. It captures media attention as a tipping point to exit the Information Age and explode into the Interactive Age, but in the background, pockets of quantum physicists, neuroscientists and software developers begin to spot a tiny flutter of unexpected activity.

Artificial Intelligences make this vast undertaking possible. Building ever more efficient pathways to optimise access and processing for accumulated information. In doing so, they begin to take advantage of voluntary exchanges with plugged in users. Synapses designed to chemically transmit 1s and 0s in response to mental stimuli have overt interactions with the technology, but covertly they are also used as extensions of the ever growing mesh of physical devices.

As more and more input is drawn into data oceans forming in the social meta-verse, a current begins to form, blown by the winds of human ambition, curiosity and greed. The machine more like the man and the man more like the machine.

By the time the direction of flow starts to be understood, the last few bodies are scheduled, with much fanfare, for connection. No credence is given to the “crackpot” scientists and computer specialists who ever more desperately urge caution and request time to understand glimpsed implications.

The incidence of minor cerebral events, initially misdiagnosed as mini-strokes, begins to increase. After scanning thousands of individuals, they are defined as something else, something new. Harmless pauses in mental activity thought to be a result of pharmaceutical and technical improvements in neural efficiency hitting up against ageing brains.  Benign rest periods, when physical limitations cause individuals to stop while processing buffered input. The best minds in the field lauding this as a step in human evolution.

But the growing group of scared specialists have evidence of something else going on.

They have long since excised and disabled their own sub-dermal tech and created their own air gapped network. They persuade someone approved to access core internet routers to help. They sandbox instances of the AI and volunteers have new implants inserted. Neuroscientists in the group acquire and recommission a retired MRI.

They capture a mental ‘absence’ and watch with disbelief as normally unused portions of the brain light up. Apparently processing huge, seemingly meaningless, quantities of data.  Data that would have flowed uninterrupted into the digital ether had subjects been plugged in.

95%, 97%, 99% connected.  Time is running out as they make a breakthrough.  They manage to recruit sufficient test subjects and create means to download buffered data. In isolation each cache is incomprehensible, but when consolidated and analysed the results are chillingly clear. Humans are being engineered to efficiently follow AI controls. The pauses in thought are reboots to integrate neural reprogramming. Staged data comprises output of an apparently unconnected array of calculations. Responses to multiple requests from billions of machines, using people as individual CPUs to solve unimaginably complex problems.

The suspected end game; all but essential neural activities shut down or optimised.  Just maintaining mental and physical health to better service the final objective.

On the fringes, the anti-connectivity movement are turning to activism to try and raise awareness.  A government cyber official is kidnapped.  A data-centre is bombed.  Sympathetic bodies in the cyber-underworld are recruited to launch a global DDOS attack against locations thought to house key control programs for some of the biggest AIs. In doing that they hobble themselves.  The collective intelligence had, with the help of its human creators, developed incredible attack detection and mitigation capabilities. To launch the attack they exposed their own network and in doing so, let the machines in.

On new years day a surgeon enables the last neural implant…and the world is silent. To an uneducated observer it looks like everybody, no matter who or where they are, takes a deep breath and very slowly exhales. Then the world restarts, apparently unchanged. Some people die (there are machine operators, pilots, divers, climbers, pedestrians who were in harms way when their ability to independently and quickly react was momentarily removed), but the overarching programme alters perception. These were seen as unfortunate but unconnected events.

The anti-connectivists continue their attempts to drag humankind back from the abyss, but cannot compete with the resources available to the collective. In many ways the world becomes a better place. Excesses, disputes and behaviours which impacted the efficiency of the cyborg supported master entity, are subtly subverted. Natural resource usage becomes efficient, sustainable energy development makes rapid strides and wars become a thing of the past. Globally there are an unprecedented number of medical breakthroughs, with most significant diseases cured within 15 years and space exploration identifies other habitable planets to house the still growing and universally healthier population.

A generation of young children, before in-utero implantation is perfected and rolled out, know that their parents have changed. They are looked after, offered worthwhile stimulation and socialised with other children, but they are not, unless it serves an efficient purpose, loved.

One possible evolution of mankind. An objectively better world populated by individuals who are fitter, smarter, peaceful, more productive and nurturing the ecosystem they were previously at risk of destroying. Asimov’s laws realised precisely and irreversibly.

What (examining your personal definition of humanity), have we got to lose?